This piece originally appeared at Sprudge.com, along with other pieces, where I was a writer and editor.

In Seattle, A Geek’s Paradise Of Technical Books, Coffee, And Coworking 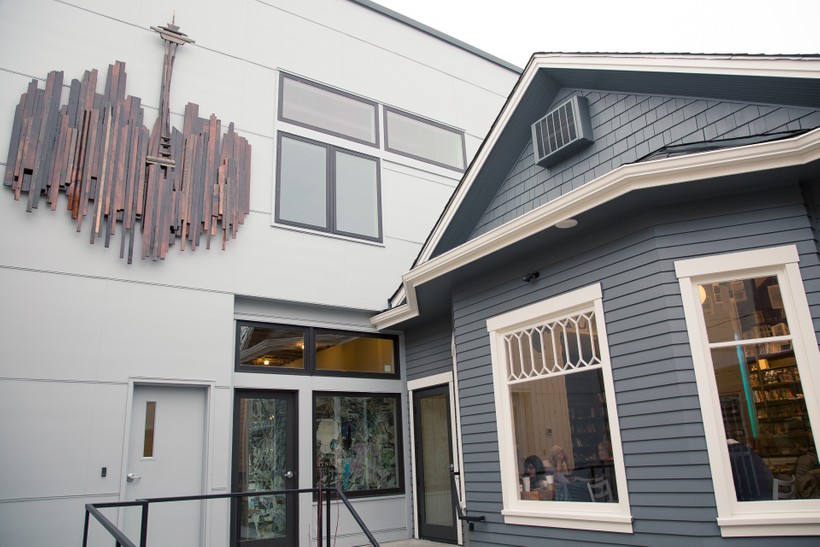 Danielle and David Hulton founded Ada’s Technical Books–named after Ada King, Countess of Lovelace, the woman who wrote the first computer algorithm–to respond to an immediate need. Like many technical Seattleites, they were spending multiple weekends a month driving the three hours down to Portland, OR to visit Powell’s Books Bldg. 2, the technical books annex of the Powell’s Books literary mecca. When they opened their shop in 2010, to decide their starting selection of books, Danielle and David reached out to their community of geeky friends and asked: what are the crucial books in your fields of expertise?

In three short years, Ada’s Technical Books in Seattle built up such a thriving community that they were able to open a new, much larger space in October 2013. For their new store, first reported on by Capitol Hill Seattle and The Stranger, they decided to greatly expand their retail vision. The new communal hub they have created is equal parts deeply technical bookstore, wonder-inducing exploratorium, and cutting-edge cafe. 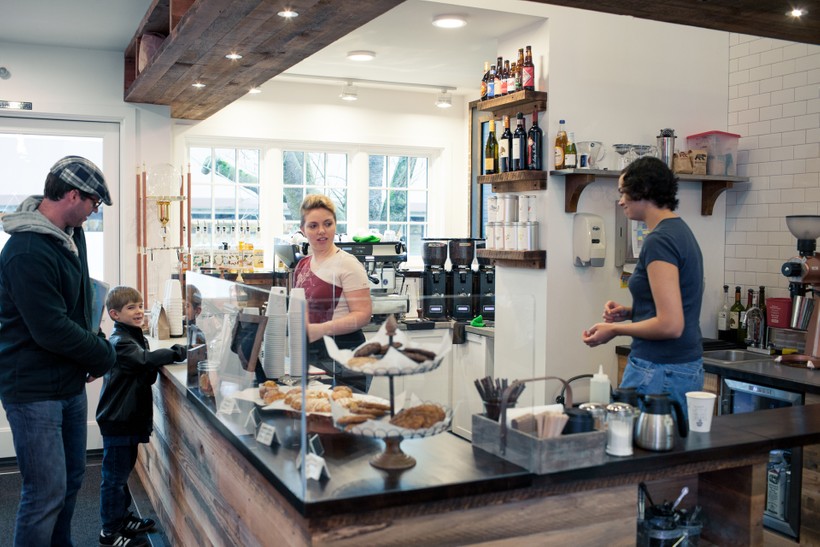 And now, Sprudge.com is the first to report that this geeky complex on Capitol Hill will soon be home to a coworking space. Ada’s is a glimpse into one of the possible futures of the retail and social landscape, and if all goes according to plan, it’ll make for a coworking/community hub with some of the best office coffee on the planet. 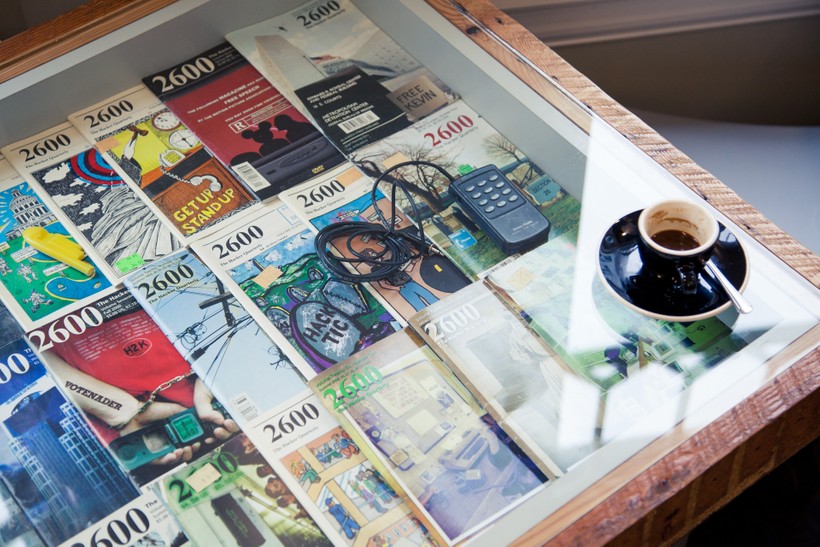 It was only after interviewing the Hultons that I fully appreciated the depth of their commitment to an accurate, considered approach. But from the very first moment I wandered into their shop and sat my cup of coffee down on one of the cafe’s stunning custom display tables, I could tell Ada’s was doing things differently.

First off, there was the coffee: a Guatemala Concepion Chuito from Kuma Coffee, prepared as a highly passable “Coffee Shot” via a Mahlkönig EK43 grinder and Nuova Simonelli Aurelia II espresso machine. If you don’t already speak the lingo, the “Coffee Shot” is a highly geeky/experimental way to make brewed coffee on an espresso machine. It’s rarely seen in North America; it is the default brewed coffee at Ada’s.

Then there was the table itself: a reclaimed wood frame holding a mosaic of dozens of 2600 magazines, along with a tone generator and a Cap’n Crunch whistle. 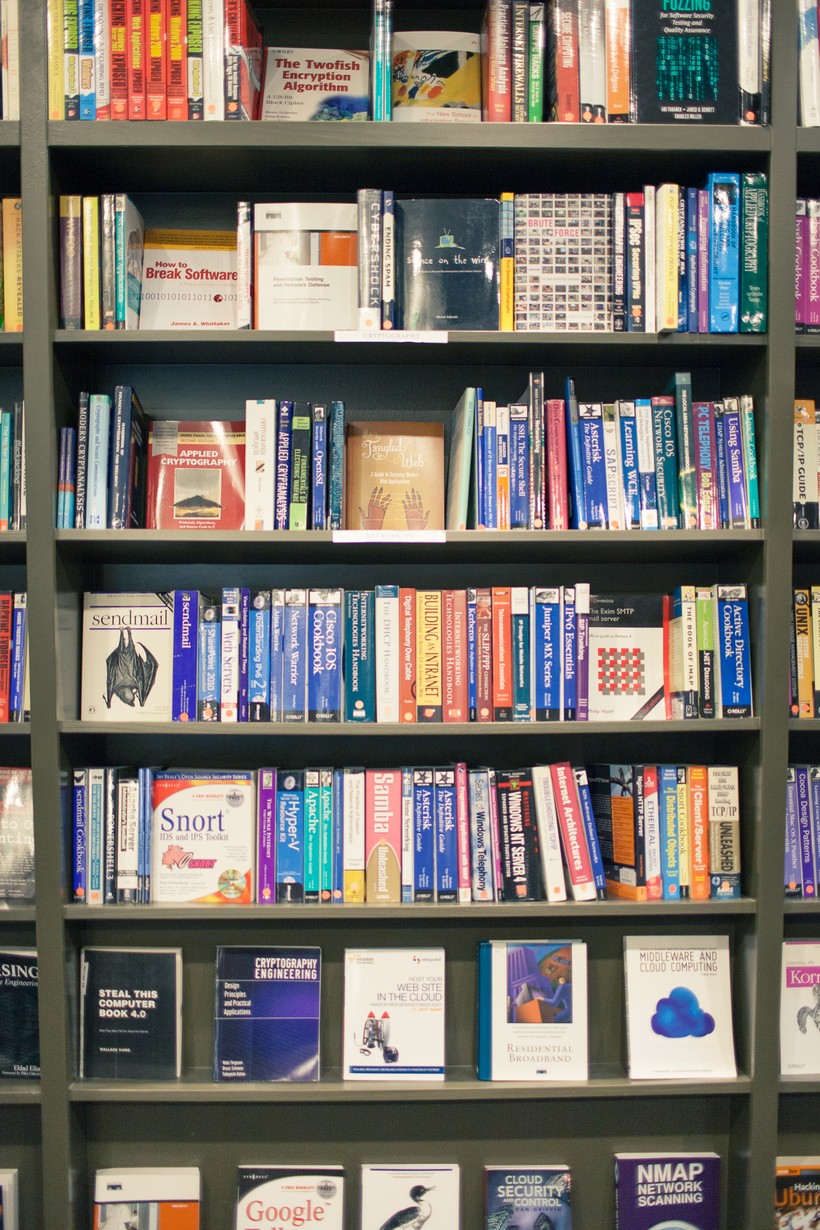 2600 has been one of the seminal news and culture publications for the hacker subculture since its founding in 1984. Back then, if you sent a 2600 Hz tone–conveniently discovered to be the exact frequency generated by yellow whistles being given away in boxes of Cap’n Crunch–down a telephone line, the system went into “operator mode,” allowing free calls and other fun. All of the magazine issues displayed in the table came from David Hulton’s personal collection.

While growing up in San Diego, Mr. Hulton founded the city’s 2600 reader meetup. He went on to co-found the popular ToorCon hacker conference, and now works on cryptography and high-performance computing at Pico Computing–which is where he first met Danielle, who was working there as an electrical engineer. Danielle left to focus on running Ada’s, while David stayed on, though he works barista shifts Friday mornings and stays involved with the store. 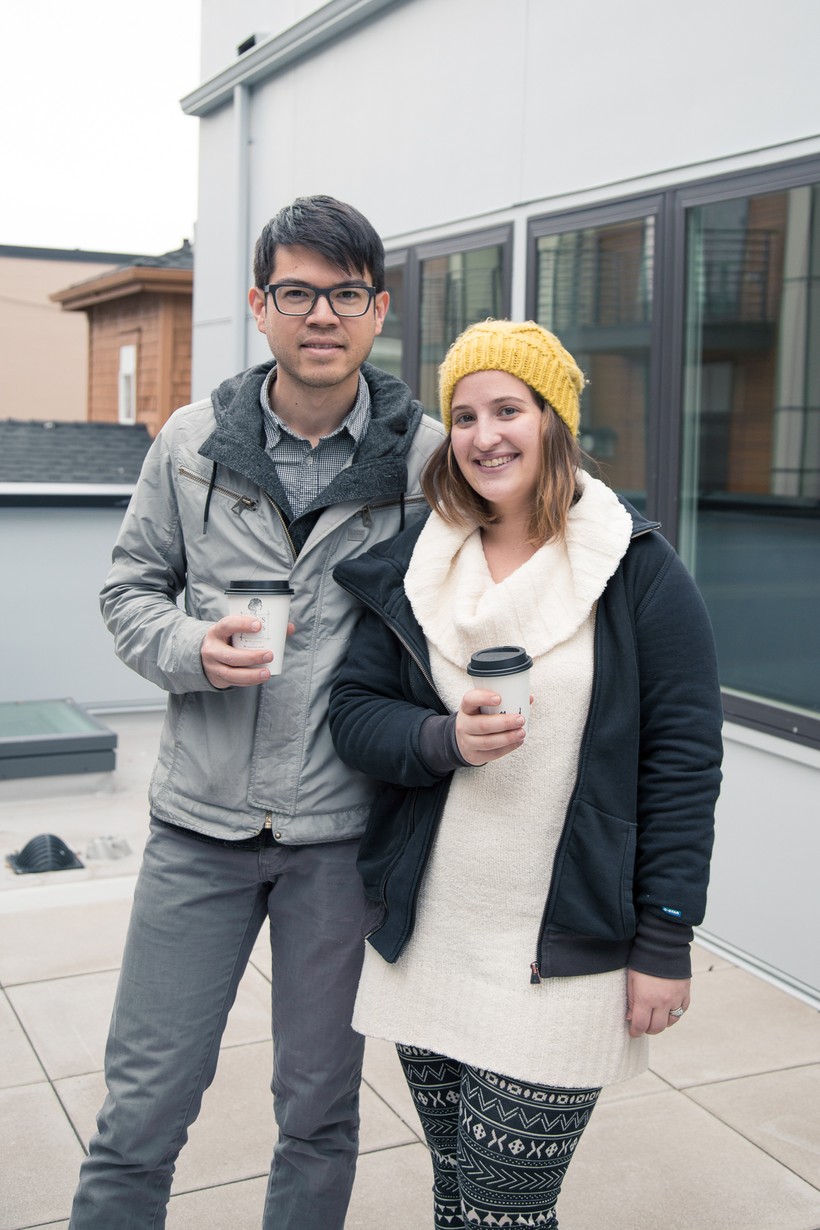 A sort of geek evangelism seems integral to the vision for Ada’s. One of the big priorities of their expansion last year was increasing their capacity to host technically oriented reading and lectures. When hiring staff, they very much looked for people who could help welcome anyone with a hint of curiosity into the fold.

David Hulton said that he’s seen a lot of changes in the tech community in the nine years he has lived in Seattle. As the scene evolves, more engineers are growing up and having children. These technical folk are looking for ways to pass the geek torch on to their young, and Ada’s is there to help: games geared for smart kids, DIY electronic kits, and science toys cover almost every surface (including flecks of radioactive material on sale next to a build your own Geiger counter kit). Ada’s stocks Young Adult titles with a geek cant, and they’re organizing story times and all-ages maker workshops. 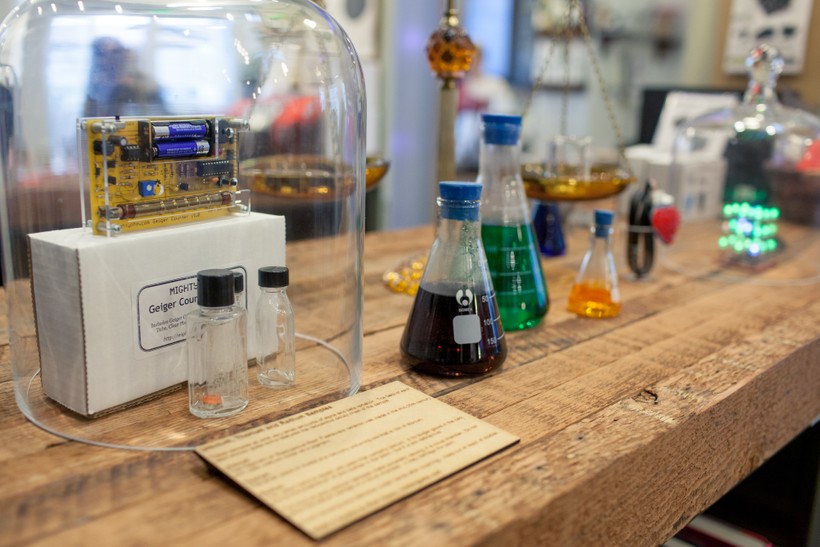 A level of intentionality and technicality is brought to every aspect of Ada’s. The 4000 LEDs built into the dividing wall have a custom-built system fluctuating them based on a bit of website they whipped up. The parts bins on the walls hold crazy treasures like a build your own ethernet tap kit–which is some serious ordnance to be handing a kid! 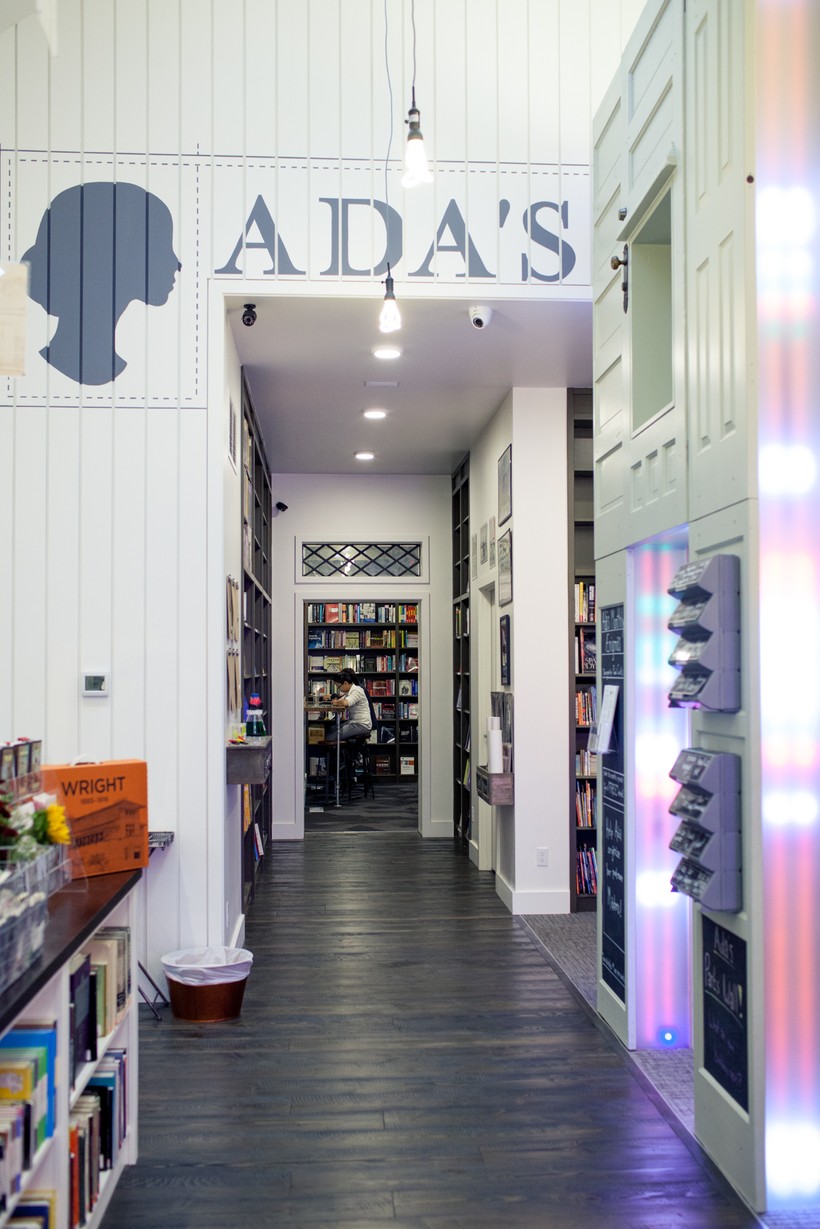 It’s not just the bookstore side of things either. The Hultons partnered with long time friend Crystal Blaylock Gee to create a delicious vegetarian cafe menu. I tried the Juniper Berry, Rosemary and Pistachio granola parfait and it was refreshingly savory and interesting. Ada’s seasonal egg scramble made for a delicious light breakfast, and their carrot-cake scone hit the right level of indulgence without being too sweet. 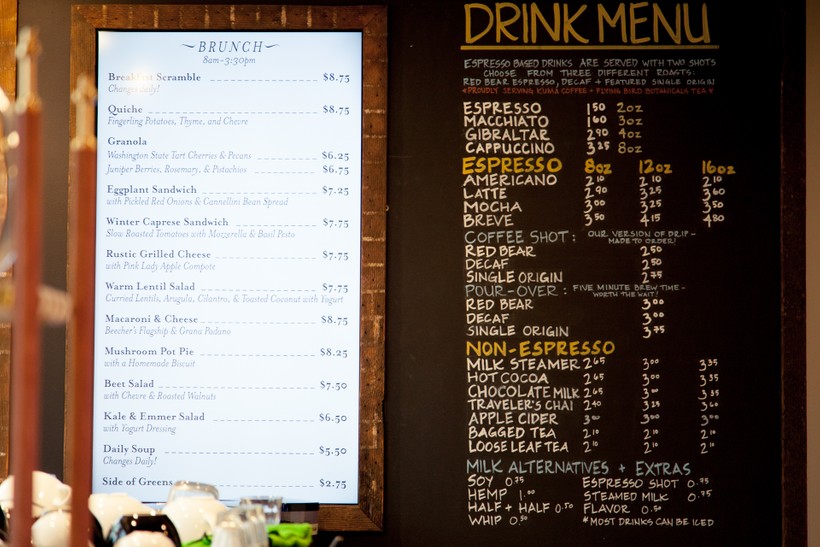 Mr. Hulton says he has been falling very quickly down the coffee geek rabbit-hole, and the coffee program that Ada’s created with help from Visions Espresso is certainly ambitious and interesting. Christos Andrews, a 2012 and 2013 Brewers Cup veteran, has been hired to helm the coffee program, and on one visit pulled me a quite delicious shot of a decaffeinated Ethiopia Shakisso Natural Process from Kuma. Mr. Hulton then showed off their experimental cold-drip coffee tower modified to control the frequency and size of water droplets; he says they’re very interested in how they can use their experience in other areas to innovate in coffee. 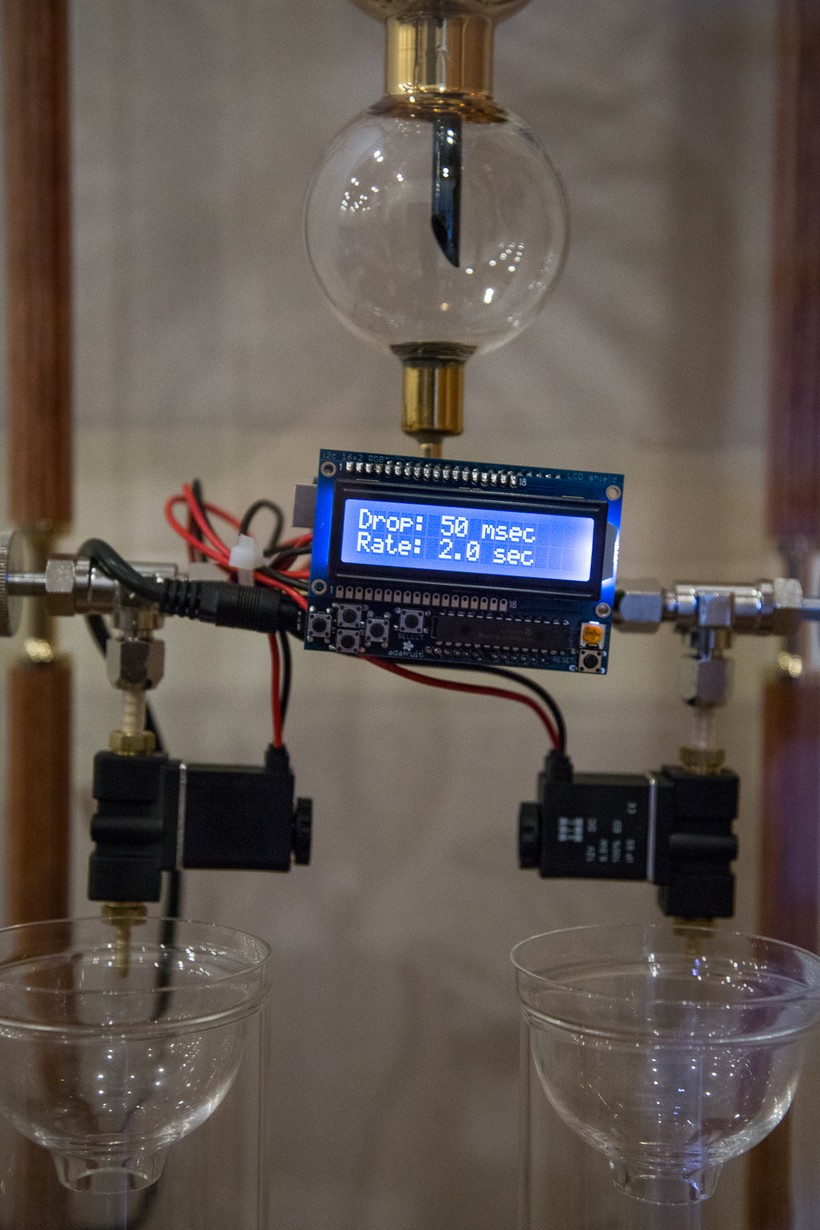 In our interview, David talked to me about the exploding hacker space movement in Seattle, how 10 or more separate “clubs for nerds” (as he called them) have sprouted up all over the city. Though he didn’t say it in as many words, it seems to me that the goal with Ada’s is to create a more public, general purpose functional space in the vein of these hacker spaces. To create a space oriented in every facet towards a curious, technically engaged mindset, and full of the prerequisites for creating not just projects and ideas, but a real sense of community. 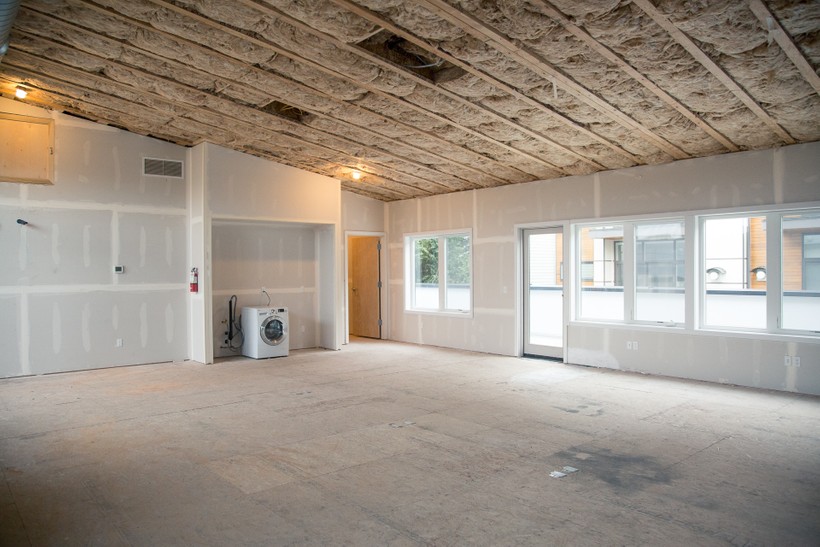 With a mix of reserved and come-and-go desks, the coworking space that they are putting into the lofty upstairs of the building will be a radical next step in that vision. When we talked, David was already scheming about how they could hack up an ordering system to let the coworkers order from the cafe downstairs. Now that’s progress.

Explore more of our features on the intersection of Coffee + Tech.